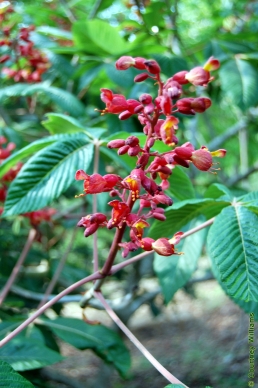 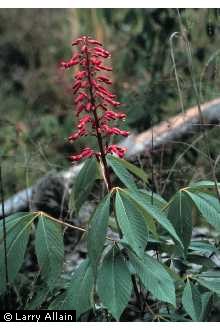 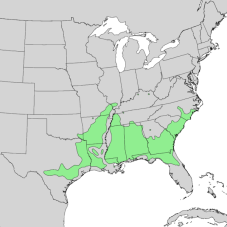 The common Red Buckeye (Aesculus pavia) is scattered throughout the southeastern United States from Texas to Florida and northward to Illinois and Virginia. It is most often a shrub or small tree.  While large trees of this species are rare, they have been reported on a few occasions, and I personally have found a few very large ones.

One Red Buckeye in Jungle Gardens on Avery Island stands out as being exceptional. When Mike Richard Sr. of Jefferson Island showed this tree to me three years ago, I could not believe how large it was. Since that time I have searched the literature and internet for other record-size Red Buckeye trees in the United States and have not found any reported.

Because of this tree’s size and location, I believe it is unlikely a cultivated plant but instead a naturally occurring one. The species is frequent in the forest throughout Avery Island and even occurs in woods along the island’s outer edge near surrounding cypress swamp forest.

I contacted the state’s Forestry Service and described the tree, telling them what I thought we had on Avery Island. On February 26, 2019, Dr. Rick Williams of the Natural Resources Conservation Service, a section of USDA, came to Avery Island to check out the tree and take the required measurements.

This Red Buckeye is 40 feet tall and has a canopy of 40 feet across and a circumference of 41 inches. Dr. Williams said unquestionably it is the largest one he has ever seen, and there are none of similar size recorded in Louisiana. He is confident the State Forestry Commission will approve its listing as the State Champion Red Buckeye. Furthermore, he went on to say that since no other large ones are listed on the National Registry, he thinks it is an excellent candidate as a National Champion tree.

NOT BAD! NOT BAD AT ALL!