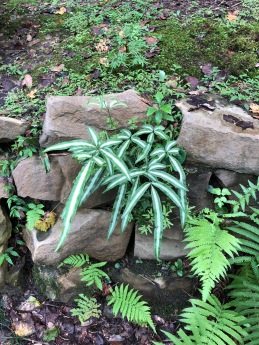 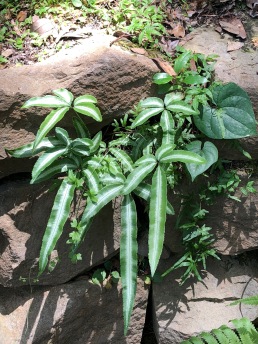 Ravine side behind Timber Bamboo 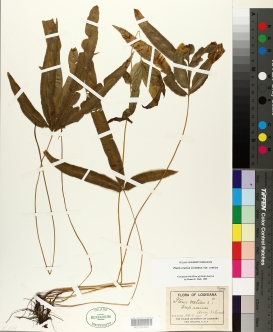 Pteris cretica, almost pantropical in distribution, is so common in cultivation and escapes so easily in warmer regions that its true native home remains uncertain, although it is thought to have originated on the island of Crete.  Some authorities have labeled it indigenous to tropical America, including several states in the Southeastern United States.

The earliest record for Pteris cretica in Louisiana is from Avery Island on October 18, 1910, by R. S. Cocks, a botany professor at Tulane University.  He visited the island three years later, in April 1913, and made a second collection of the fern, commenting on the label “Deep ravines, very abundant.”  1913 was long before the formation of Jungle Gardens and the beginning of the exotic plant collections, indicating that the fern was not introduced to Avery Island as part of horticultural expansion. This information supports John Small’s claim that Pteris cretica could be indigenous to Avery (and other parts of Louisiana) as well as Florida.

There are two varieties of Pteris cretica that occur in the wild in Florida and Louisiana. Both have been found on Avery Island and both have been referred to as the Avery fern.  Pteris cretica var cretica is represented by herbarium specimens from collections up until the 1960s (this is the only variety collected on Weeks Island), but Pteris cretica var. albolineata is the variety now found living on Avery.   P. cretica var cretica has all green foliage, whereas albolineata has a bright white stripe down the middle of each leaflet.  Prof.  Clair Brown of LSU visited Avery Island many times and wrote about these ferns in his 1942 publication; Ferns and Fern Allies of Louisiana.   He states:  “It has been known there for a long time as the Avery Fern. . .” He also mentions the albolineata variety as being  “cultivated in large quantities in Jungle Gardens.”  It would be expected that by this time, the albolineata variety was brought into cultivation there by McIlhenny. Unless there is another discovery of variety cretica, it appears that albolineata is the only variety that currently survives on Avery.

I began exploring the salt dome islands of Weeks and Avery in 1971.  Prof. W. D. Reese of USL took me to a location on Weeks Island where Pteris cretica had previously occurred in abundance.   We found but a single specimen on a ravine wall that once had a thriving colony of hundreds of plants.  The plant was in such poor condition, with only a single badly tattered frond, that I considered it unworthy of making a collection.  Little did I know that would be the only plant I would find for the next 45 years.   We noticed that the ravine sides were covered in tall, clumping grasses, which indicated that the forest canopy had been seriously disturbed, allowing excessive sunlight to reach the ravines, potentially drying them out and making it very unsuitable for the ferns to persist, much less thrive.

From the 1970s-present, I explored the myriad forested ravines on Avery Island at every opportunity.  During that time, I also made several return trips to Weeks Island, always in search of the Pteris fern.   Unfortunately, the data from the specimens of the early 1900s did not document locations accurately enough that one could revisit them.   Reese and Thieret in their Botanical Study of the Five Islands, completed in the mid 1960s, found Pteris cretica on Weeks, but not on Avery.  It seemed like the fern might have completely vanished from Avery Island.  I always held out hope, however, that I would rediscover it in the “next” ravine I explored.

On October 17, 2016, I was guiding a group of university botany students on an afternoon tour of Jungle Gardens.   As we ventured on the trail in the Palm Garden, much to my surprise, I caught sight of two young plants of the Avery fern growing among the roots of a large tree along the path.   I said nothing, maintaining my composure, but I was elated to finally rediscover this fern growing on Avery Island after all the many years I had searched for it.  The following day I returned to the spot to observe the two plants in detail.  Both were juvenile plants, indicating a recent dispersal, no doubt from older mature plants.  Immediately, I began searching the nearby ravines and gullies near this location.   To my disappointment, I was unable to locate any additional ferns.

One month later, on December 16, while exploring near Sunken Gardens with Dylan Derouen, we found a weedy, disturbed area with an abundance of fern species.  As we made our way up the hillside, we found two more plants of Pteris cretica.  These were very large plants growing about 10-12 feet apart.  One was at the base of the hill, the other, a much larger plant, was higher up on the slope.   Both had fully mature, fertile fronds.  I showed these plants to Bernard Patout.  A few days later, not far from that site but inside Sunken Gardens, Bernard found a single juvenile Pteris fern growing among the stone work of a retaining wall and called it to my attention.

A full year later, December 17, 2017, while exploring for seedlings of the newly discovered Gingko trees near Bird City, I discovered more Pteris ferns.  Several distinct clumps of mature plants were scattered along the banks of a shady, shallow ravine that lies behind the grove of Giant Timber Bamboo not far from the Gingko trees.

After so many decades of failed searches for the Avery Fern, it has been rediscovered, thriving on the island, though in smaller numbers than decades past. I am optimistic there are more Pteris cretica populations waiting to be found on Avery Island.